I want to start by saying two things. Firstly, after about 1000 miles of driving in Italy over the past week I am no closer to understanding the Italian driving psyche. Secondly, I was quite happy to see my hire car was a Fiat 500 – until I got to the car park and the car my remote unlocked the larger and uglier 500 L family bus (complete with diesel engine). The joie de vivre that comes with the idea of small (petrol powered) Italian cars rather died at this point. This is not, and will not be turning into, a car review column but that car is without redeeming feature that I can find. I don’t mean to offend anyone who may have bought a 500 L, but what were you thinking?

Anyway, as you may have guessed by now I have been away the last week, which means two things; firstly the MR2 still sits broken at home and secondly I don’t have much club motor sport stuff to write about having not seen it with my own eyes.

However, my week in the late Italian summer sun has given me pause to think about life and the wider motor sport universe. Naturally I made my way down the autostrada to Modena and Maranello to pay due deference to the great marque. But first and foremost, I felt compelled to go and visit a location which, 21 years ago, made an indelible mark on my not yet quite 9 year old mind.

Throughout their history sports have their watershed moments; Cycling had the death of Tom Simpson and the Festina affair and the football community suffers still with the ongoing agonies of Hillsborough. Formula One had its moment during the weekend bridging the months of April and May in 1994, in the pleasant mid-Italian town of Imola.

5 serious incidents, a number of serious injuries and 2 fatalities lead to a safety revolution in the sport. Whilst motor sport will remain a dangerous sport the sad deaths that weekend of Ayrton Senna and Roland Ratzenberger were not allowed to be in vain.

The international support and adoration that Senna still commands is remarkable. There is still a plethora of mementos such as flags and flowers at the crash site on the outside of the Tamburello corner, and yet more on the inside. These range from flags of multiple nationalities to fresh flowers, T-shirts and even the odd poem. The man’s reputation is still such that 21 years on in the brief period we visited the memorial we shared the experience with around 10 others, on a not particularly special Thursday in September.

The monument itself is beautifully pitched, incidentally. A full size bronze statue of the great man sat in deep contemplation in a tranquil corner of Imola’s Parco delle Acque Minerali on the inside of Tamburello. The poignancy of the tribute is truly remarkable and it is impossible not to be quietly seduced by the atmosphere there.

However, on a personal level, something equally poignant in a different way can be found 250 metres along the track. I was struck by a slightly uneasy feeling. Roland Ratzenberger was by all accounts a friendly and universally liked man. At the age of 34 he was a late-comer to Formula One with the troubled Simtek outfit, but a capable driver – he had won his class at Le Mans and finished 5th overall the year before. He died the day before Senna in an accident which still sends a cold shiver down the spine of anyone who saw the footage of his lifeless body in the car as it came to a rest at the inside of the Villeneuve kink, the next corner along from Tamburello.

I am sure he would be more widely remembered if it were not for the events of the next day. However, one long since departed rose hung limply on the catch fencing at the site of his accident and served as the sole representative of any thought for him. I am not given to placing tributes if I am honest (I didn’t contribute to the pile at the Senna memorial for instance), however I profoundly regret not having brought something to leave in his memory. None of the other ten joined us here.

This does beg the rather philosophical question of; by what measure can we judge the life of a man? Why should one life have such a high value placed on it over that of another, by all accounts, decent human being in terms of the sorrow it commands? Both men were gladiators in a dangerous sport, with the only differences ultimately being their track record and the end of the grid at which they competed. I understand the impact Ayrton Senna had as a driver and an individual on motor sport fans – the shower of tributes is a testament to that. However that lonely, dead flower made me feel profoundly sad.

Imola is a beautiful place and worth the 4 hour round trip I made to see the memorial and the location. I’d urge anyone to visit there. However, whilst paying your respects to one of the giants of the sport, please also take 10 minutes to walk a little further and spare a thought for Roland and his more quietly sad story.

PS: Unfortunately the ‘other woman’ of sport, rugby will be occupying me next weekend – so I will miss the National B meetings at Shelsley. I will be back for Loton on the 27th. 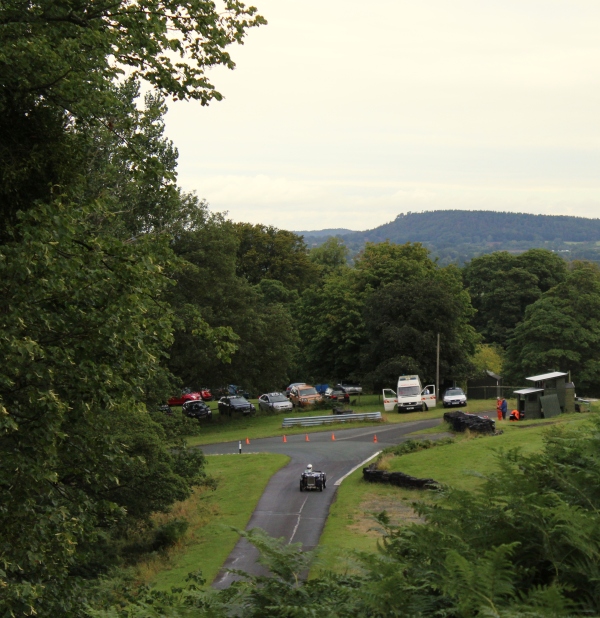 Get in car, drive car to venue, put foot down, drive car home. What could be simpler?  The grass roots level at any form of sport is vital – you will often hear politicians wittering on about it when talking about rugby, cricket or (if they want to look ‘of the people’) football.  Motorsport is no different.

I am not talking about trying to find the next generation of superstars either, that is something that kids are basically devoting a life time to from the time they are old enough to sit in a kart these days. There are a few exceptions to the rule (Andy Priaulx for one), but not many.

I am talking about the amateur scene: the guys and girls who invest a huge amount of time, money and devotion into their passion. I’m talking about people like Andy and Debbie Dunbar (for example), who dragged themselves to Loton Park in Shropshire over a bank holiday weekend and spent their Saturday evening outside, in the pouring rain, replacing a drive sprocket on their motorcycle engined Force. What this is, ladies and gentlemen, is the sport for the sport’s sake. It is love.

This passion is never typified better than in a National B meeting, especially at somewhere as exquisitely English as the aforementioned Hagley and District Light Car Club venue.

This is a subject I spoke on at great length from my commentary box there this Sunday gone. From competitors like the Dunbars in their single seater, the Newells in the MX5 and Andrew Rollason in the lowly but keenly driven Ford Ka, to the marshals and officials of the meetings (who all volunteer their time) – amateurism (in its most positive sense) is the pounding heart beat of the sport in this country.

The meeting drew all manner of the automotive life under the sun ranging from road cars of under 1.4 litres – including that Ford Ka and an electric Mitsubishi i-MiEV – to the veterans of Formula 3 driven by Jonathan Varley and Simon Keen, which enjoyed a battle for Fastest Time of the Day.

Most importantly and fundamentally, what the meeting generated was fantastic sport. Sunday especially produced some remarkable competition with the battle for victory governed by less than a tenth of a second in several classes.

Phil and Dave Newell enjoyed an entertaining tussle sharing the road going MX5 (is there a purer, more ‘everything you need nothing you don’t’ route into competition?) with both drivers posting an identical 67.68 seconds on their first runs (having also tied it up on one practice run), with Phil only breaking the deadlock on the cars last run of the day when he got his head down and pulled an entire second out of the hat.

The class for cars over 2 litres was equally exciting, as the Meeks in their classic Subaru Impreza and Hutchinson’s in their wonderful BMW 1M did battle for honours over the afternoon. The Hutchinson’s held a fairly comfortable advantage on the Saturday of over a second. However in the first runs on the Sunday Geraint Meek fought back, going under 60 seconds (his first time doing so at Loton) with a time of 59.97. Simon Hutchinson was second after the first runs only three tenths in arrears on a 60.28.

The second runs then produced a flurry of intense competition as this time, Simon Hutchinson produced a time of 60.27 to go second.  In response to this Mike produced the same time as Meek’s first run, a 59.97 to retake the place, but only after the Subaru had posted a 59.96 to take the class by one one hundredth of a second. Gripping competition in every sense of the word.

There were class records in both the Downton Mini’s Championship with Martin Watts taking the benchmark to 57.17 seconds and the Westfield Sportscar Club Championship as Adrian Clinton Watkins went on a remarkable streak, continually lowering the class record he already held on three consecutive runs over the weekend.

In the single seaters, the Dunbars found themselves separated by only four hundredths of a second on the Sunday, with Andy taking family honours on both days and the overall win in their class. The battle for fastest time of day between Varley and Keen was covered by nine hundredths of a second, with both men dipping under 50 seconds on their first run. The competition came to a halt with the second runs however as Varley lost it on the outside of Fletcher’s Dellow, sending his March nestling in the undergrowth, and Simon Keen going off on the inside of the same corner before coming to rest harmlessly in the shade of an oak tree on the very next run. At least both drivers and marshals got a work out extracting the cars from the garden and pushing them to the paddock from the escape road at the next corner.

If nothing else, meeting such as this one show the vitality of the sport at all levels in the United Kingdom – especially with hill climbs becoming increasingly over-subscribed with competitors. So long as this streak of amateurism remains in the British spirit and the love of being involved in motor sport continues to lure the marshals and officials into giving up their time free of charge – the grass roots of our sport will keep going and keep growing. So at least I will have plenty to talk and write about.