To think that I was the most worried about the basic minutia of the day when I started out. Wondering where I am meant to park, when I am meant to get going to get to the start line – all of that stuff.

Maybe it was arrogance, maybe it was the fact that I didn’t think it through enough – but for some reason I wasn’t worried too much about the driving side of it. On reflection maybe I am a bit dim!

Either way, I arrived at Prescott nice and early for the Midland B License Championship, in order to go through the normal pre event routines of applying numbers, walking the hill, getting to know my class mates and so on a so forth.  I was worried it was too early to get there and I would end up looking like a bit of a plum.

But what with signing on, sorting the car out, getting scrutineered, attending the drivers briefing and trying to have a walk up the hill – you don’t have time to stop!

The first thing I noted about Prescott was what a dynamic surface it is. You don’t get a sense from YouTube videos of the angle and gradients of the road in the first couple of corners, and you never really understand how you have to wrestle a car through Pardon’s (a tight, steep left hand hairpin) until you drive it.

As a beginner you always (or at least I do!) have these fantasies of sort of winging it up the hill, playing it by ear and relying on your natural talent to get the car up there quickly – we all like to fantasise about being a natural talent and that we could all be Gilles Villeneuve if we wanted to.

For 95% of us (me included) this is fairly quickly dispelled.  One run up the track to get my bearings and the process of figuring out what to do at each turn begins.  I have discovered that I work best when I am going through a process for driving – it’s like learning the steps of a dance, there is no flying by the seat of your pants, no improvising. You brake at a certain point, change into a certain gear, turn in, change up at the same time, its all completely timed, and once you figure out your dance, you repeat it.   Occasionally you will change the steps depending on how it all feels, but it’s certainly a re-active process, not a pro-active one.

It also highlights to you how little you know your car, when you have only the opportunity to drive it on the road. Finding out where the really useful power is, just how far you can push it before it understeers away from you (joys of FWD) is an adventure in itself. 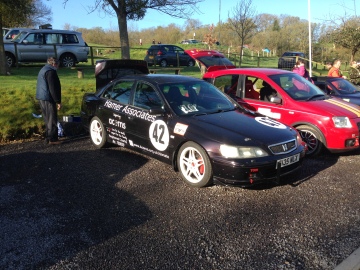 For example, what would have seemed totally counter-productive to me (dropping down to first round the tight parts) actually works well, when I thought it would kill the momentum. This is a polite way of saying you are going slower than you think at first!

So these are all steps you add into your new dance. And you do that dance, step by step, and just try and make your steps cleaner and crisper and change them if you think you have a better idea. Sometimes that works, sometimes that doesn’t.

Either way, the voyage into the unknown was a little compromised by the loss of a practice run (the reasons for which no one will be questioning however!) – so a certain amount of going for it was involved in run 1 – and then again in run 2, where I took some learning points from run 2 – like going into first round Ettorie’s (the second turn) and not changing up to third before semi-circle (the last turn).

Despite an improvement in time from 60.95 to a 56.61 at the end of the day to secure the class, there are still steps to add. I will be down in first gear for Pardon’s hairpin for a starter! There is a lot more to come.

I don’t believe I said that. I feel dirty.