It is fairly amazing, when you stop to think about it, how many services that you sort of take for granted – because you see them whizzing round day in day out – are totally dependent on the kindness of strangers dipping their hands into their pockets.

This includes bodies like the RNLI, the Air Ambulance (the friend of racers and rugby players – of which I am both – alike) and the Nationwide Association of Blood Bikes that criss-cross the country providing blood and organs for transplants and surgery. All of them can be sensibly classed as emergency services.

The Prescott Bike Festival, at the Prescott Speed Hill Climb in the Cotswolds, was created to provide a fundraiser for the Severn Freewheelers. They provide the out of hours support for hospitals in Gloucestershire, Worcestershire, Herefordshire and North Wiltshire, providing transport for blood, organs, samples, human milk – everything.

Every day of every year.  Christmas, Easter, a week next Tuesday.  You name it.

However, they need to fund themselves completely. It’s bloody hard work! And that is what the bike festival is all about – helping raise funds.

Money was raised through money on the gate, selling passenger rides on racing sidecars or Morgan 3 wheelers and charging riders for the chance to take their own bikes up the sinuous bends of the hill climb. People also got to watch the amazing paddock specials, like the mono-wheels and custom bikes.

I was a ve 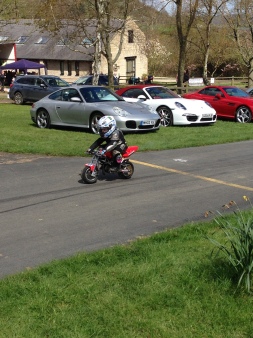 ry welcome opportunity, when I was asked to provide commentary and comparing for the festival, not least because I was able to interview some brilliant and interesting people who had come along and given their time to support this great charity.

When one meets people from the tele, you are never sure what you will get – I mean you hear stories about celebs don’t you? The stereotype couldn’t have been further from the truth with Amanda Mealing, the enthusiastic biker best known for her roles in TV dramas Casualty and Holby City. It was Amanda’s debut event in her new role as an Ambassador for the charity, and one in which she excelled with time for everyone and anything at the event, and an obvious enthusiasm for the work that the blood bikes do – a solid gold ambassador for the charity.

In addition we got to see nuclear scientist and engineer Allan Millyard, with 7 of his fantastic creations. Whether it was the bespoke 5 cylinder Kawasaki, the Flying Millyard – which is powered by a 5 litre V-Twin (which is actually from a B-25 World War two bomber),  or the amazing Viper engined motorcycle that is basically sitting astride an 8 litre V10, with a wheel on either end, the crowd were delighted and amazed in equal measure.

you do, or Kevin Smith, with the world’s fastest mono-wheel. Both of which were challenging to get up the hill to say the least, but provided both pilots with something of a triumph over adversity!

A massive amount of motorcycle experience was added by adventure rider and author Nick Sanders, who has written 4 books on endurance motor-cycling. In 1997 he rode around the world in 31 days and 31 days and 20 hours – an exhausting odyssey that involved some days covering over 1000 miles of riding.  In 2011 he rode from Alaska to Tierra del Fuego – and back – in 49 days and 17 hours.  A brace of truly remarkable achievements, from a man whose agenda seems purely to be living life.

A final word has to go to the lads from The Bike Experience.  This amazing charity helps people with life changing injuries get back out there and ride bikes. One of their beneficiaries, Andy, who represented the charity on the hillclimb, is paralysed from the chest down. However, with a thumb gear change and rear brake added to the bike, £10 toe clips from Halfords, and Velcro to keep his knees close to the fuel tank, he now does track days once more on his Yamaha R6.  One less thing that has to change – and that’s worth a look!

The combination of a wonderful venue, great bikes, great weather and truly interesting and generous guests has meant that the festival was able to have its best event since its inception in 2011.  A pleasure to attend, a pleasure to work at, and what’s even better – the Freewheelers left with a helmet load of cash!