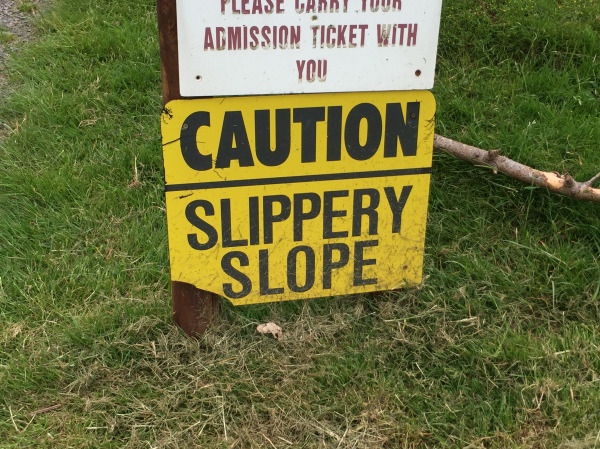 I’ve never been brilliant with advice. No matter how sensible, logical and rooted in experience this little tidbit of wisdom may be, I will almost always decide it doesn’t apply to me and will soldier on learning the hard way until I realise that it does.

Motor sport is a slippery slope. You start out thinking, I am going to spend nothing, I’ll be competing against myself and it’s going to be about self improvement and enjoying it..  But, he’s got stickier tyres than me. I could just upgrade the air filter. Those Corbeau seats look light…..

Well my slide into a lifetime of Motorsport penury continued at Shelsley Walsh – my particular vice on this occasion being a set of used Toyo semi-slicks. Granted, at £100 sets of tyres don’t really come cheaper, and so my logic is it does sort of fit in with my do it on a shoe string ethos. Though that argument is rather voided by the fact I had a perfectly usable set of normal road tyres… and possibly further voided by the Thursday night sprint to Oxford to pick them up and rush to fit them on Friday.

Anyway, the British Championship circus was rolling into town for the first of two visits to the historic venue, and if that isn’t worth getting your cars party shoes on for I don’t know what is.

My weekend – as did most of yours I suppose – started on Saturday though. There was a hint of murk in the air, which turned into mugginess as the day heated up and I spent my day trying to figure out how to make these new tyres work – having bolted them to the car immediately prior to the first practice run.  However, unlike my last blog entry at Prescott, this was a track I actually knew, so surely that’d soften the learning curve.

The first run was a mixed bag. I crept the revs up to a bit  more than usual on the start line to test the new levels of grip, and was rewarded with a massive bogging down – evidently I can give it much more clog of the line than before!

Shelsley being so steep, it does mean that a bad start in a less powerful car really is game over – however, despite being a second in arrears of my PB going into Bottom Ess (a tight left hander around ¾ of the way up and the only braking point on the hill), I was only 0.25 of a second down over the line…’oooh’, I thought, ‘that’s promising’…my target of a sub 38 second run may not be so fanciful after all.

As a result of this I decided that I was just going to give it an absolute shoe full off the line. Bloody hell – that worked. Also, by basically forgetting everything your previous tyres taught you about physics, you don’t half shift round corners as well. After one run, which clocked 37.86 – precisely 1 second faster than my previous best, I swiftly came to the conclusion that this was the best £100 quid that I had ever spent!

The only problem with this is that after 2 out of 5 runs in the weekend I had beaten my personal objective. Where do you go from here? Supposing that 37.5 was the next logical step, with the assembled having been offered a third run by Shelsley on the basis of good behaviour.

I’m not entirely sure what happened next. All I know is that when I got to the top the clock said 37.34 seconds, and I’d done 2.64 seconds over the first 64 feet.

The trouble I am finding with the learning experience of hill climbing is that I am currently writing cheques on the Saturday that my competition performance can’t cash. This weekend was to be no different. It’s why I wish I could remember what I did on that start!

The Sunday was both sunny and very, very hot. Seriously, sitting in a black car, in amongst other cars, all with their engines on – in the flame resistant romper suit and helmet and gloves…I have never been so warm in my life.

This paled into insignificance though, as the starter button has decided it no longer wants to bloody well start the car! I had to park it nose down all day to bump start the thing – fortunately I was at the top of the paddock and it’s an easy bump start!

Despite leading the class ahead of a Westfield after the first run, I was now struggling to describe the run as anything other than a solid opener. I was back in the high 37s again, and I was losing it all at the start – though as a token of consolation I was less than a tenth of breaking the 10 second barrier between the Esses, which isn’t un-nifty for a family saloon.

The second run was even worse – as I succumbed to my worst enemy and found myself trying far too hard in the quick fire left right turns of bottom and top ess, pitching the nose of the car in too vigorously and scrubbing off speed. The result was a 38 second run – and then the short wait to see the Westfield go under my first run time.

I have found one key skill that motor racing is teaching me is that you need to learn to deal with an anti-climax.  And the harder you try, the slower you go.

Unless you buy performance of course – thanks Toyo!